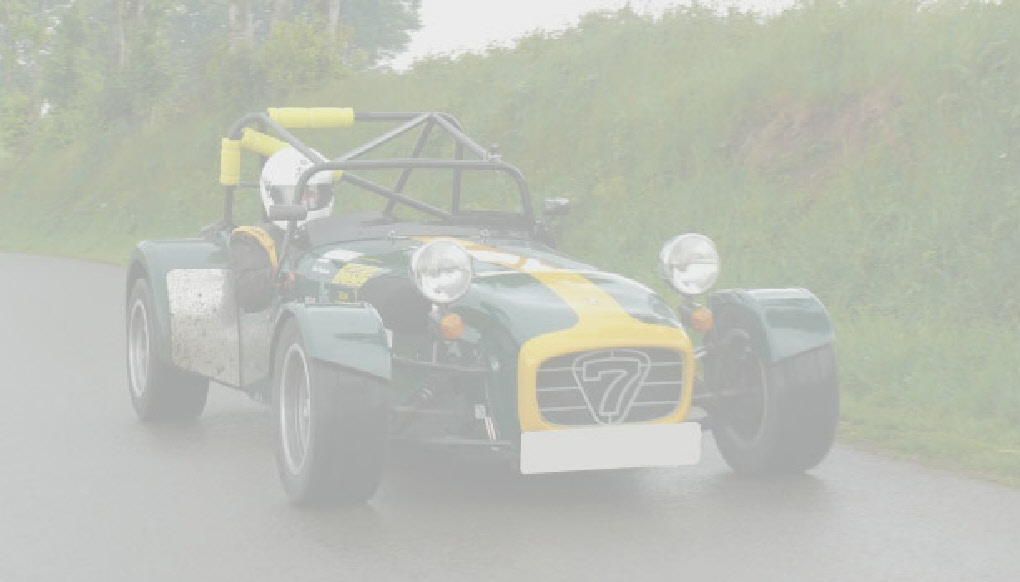 As you can see, the car is a Caterham 7.  It was built from a kit delivered in October 1995 and was intended as a winter project.  In fact, with the help of my younger son Tim, it was completed in just over two weeks, much to my wife’s annoyance as she thought it was going to keep me occupied for a good bit longer.

The car started life as a deDion chassis with a 2 litre Vauxhall engine running on twin 45DCOE Weber carburettors and with a standard wet sump.  It came with clamshell wings, which seemed like a good idea at the time, as did the 16” wheels with Michelin Pilot tyres.  Boy, what a mistake they were - not for nothing did they become known as Michelin ‘Pileups’!

After a couple of years of general motoring, which included a serious accident brought about when the above mentioned tyres decided to take on the performance of ice skates on a wet white line whilst driving over the Devil’s Dyke above Brighton (well, Hove actually), I decided that I’d had enough of pottering about and investigated competing in sprints and hillclimbs.  The need for speed lead to a long list of modifications and performance improvements that have taken 15 years to reach their current state.

I am indebted to Steve Broughton at SB Developments of Surbiton for relieving me of so much money over the years and which would otherwise simply have been wasted on trivia.  Seriously, Steve’s advice has been tremendous and we have now arrived at a outstanding hillclimb car;  I just wish that my driving skills were up to the car’s performance.  Most of the engine tuning parts have come from SBD, and the cylinder head and inlet manifold modifications, on Steve’s recommendation, by Simon Armstrong at Ultimate Performance.  With 250 bhp and 195 lbft of torque on tap, the car is quite simply outstanding and awesome to drive.  I know that SBD have since sold a number of similar configuration kits and their owners are as delighted as I am with mine.  To get the best out of any modification requires expert engine mapping and for that I had no further to look than ‘the two Steves’ at Track n’ Road.

Being a 16 year old car, its not going to be as sophisticated (if that term can be applied to a kit car) as a more modern Caterham chassis.  Its undoubtedly heavier than today’s units, especially with the Vauxhall lump, but being 6’ 2” and 15½ stone, were I to start again, I would seriously look at the wider SV chassis, with a Ford Duratec engine which is both a lot lighter than the Vx, cheaper and very tunable.  For now though I’m delighted with her.